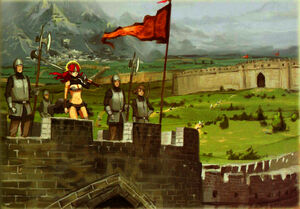 The Great Wall Border(長城) extends from the Vance County to well within the Queen's territory, and is the place where the skirmishes between the army led by General Claudette (who was originally usually stationed there before becoming Queen) and the Queen's army. It was originally built by the will of Maria Vance.

Retrieved from "https://queensblade.fandom.com/wiki/Great_Wall_Border?oldid=50935"
Community content is available under CC-BY-SA unless otherwise noted.