Hinomoto (ヒノモト) is a distant land east of the main continent. Its culture contrasts from the main continent, ranging from the land, foliage, and the overall way of life. The warriors there seek a more conservative way of life, especially the Warrior Priestesses, whose job is to fend off the supernatural evil in the land. The land is ruled by a young Empress, whose sinister subordinates abuse her power for their own gain. The land is currently in strife, rife with corruption.

The Warrior Priestesses (Musha-Miko) (武者巫女) from the Masakado Shrine are entrusted with the task of protecting the nation. They form an elite group that value the loyalty and decorum above all else, and their missions consist of repelling the invaders coming from the outside world and punishing the country's criminals.

They wear the standard clothes of a miko, a Japanese priestess.

Not just capable with a sword, the Warrior Priestesses are also skilled in archery, and a variety of other weapons, as well as the ability to banish evil spirits with talismans (Ofuda). 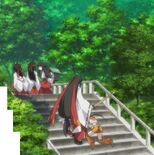 The Kouma Ninja (甲魔忍軍) are a group of ninja from Hinomoto, deadly assassins who will let nothing stop them from achieving their mission. They are led in a mercenary style, doing their missions for others gain.

The ninja wear a very standard, typical ninja outfit (the Shinobi Shozoku) except for their leader, who usually wears their own stylized version. They also wear a metal horn on their forehead like a headband- it is not known if this is used for combat or just an ornamentation. Some of the Kouma Ninja are shown to have metal gauntlets.

The Kouma ninja show advanced weaponry using ballistic machinery that launches a large amount of fire arrows, setting Hinomoto on fire. The Kouma Ninja are shown to be very fast (or have some kind of teleportation jutsu), as shown when they all "disappear" in a blur. Several ninja also utilize suicidal tactics, such as strapping large explosive filled barrels on their backs and detonating them if they are defeated. The Kouma ninja use katana, and they are also able to use ninjustu in order to fight their foes.

The Giant Frog jutsu that the group of Kouma Ninja used can spit purple acid, capable of eating through clothing and paralyzing enemies, much like a spider's web. The Giant Frog also uses its tongue to smash opponents into the ground with great force- enough to break the ground of Hinomoto. The Giant Frog's skin also is shown to be very resistant, even breaking Tomoe's sword (before she uses Kuchinawa) when Tomoe first tries attacking the Giant Frog. The Giant Frog's layer of slime that coats its body also attributes to its protection. The Frog's tongue however, seems to be susceptible to damage.

While not as formidable as the Giant Frog, the Giant Octopus is much stronger, being able to destroy an entire boat with ease. Its weak spot seems to be its eyes. 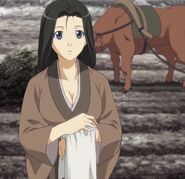 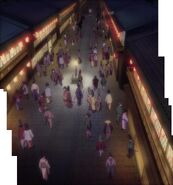 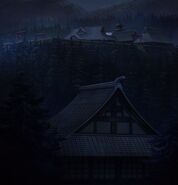 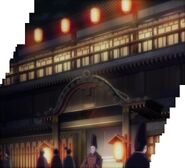