Mel Fair Land(メルフェアランド) is a land of fairytales. It's located in a totally different dimension from the usual Queen's Blade's Continent, though Alicia managed to link them via an obscure magic spell.

To prevent the Devil of Winter from taking over the land, the Naked Queen announced a tournament of beautiful fighters similar to the one in Gainos, which will award the legendary "Queen's Blade" sword to vanquish the villainess with.

The Apple Kingdom is where Zara and her grandmother lived. It was a dangerous place a hungry wolf stalked.

Other creatures living there were strange singing plants that popped everywhere, and a "mad hatter" who took a liking to fixing Alicia's clothes. 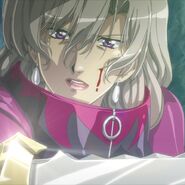 The Seabed Kingdom is where Tiina, her father and other marine creatures live. They generally have a low opinion of the land-dwellers.

The zone seems to be somehow adjacent to Kaguya's palace.

Retrieved from "https://queensblade.fandom.com/wiki/Mel_Fair_Land?oldid=53567"
Community content is available under CC-BY-SA unless otherwise noted.