Owen is Cattleya's husband, and Rana's father. He was once a great traveler and hunter who had went looking for a mystical treasure, being forced to leave the at-the-time-pregnant Cattleya to fend for herself and their child. It would come to pass that he would soon encounter Queen Aldra and be encased in stone by the Queen's Evil Eye.

He wears black underwear with orange hip-guards, and has a bandana with the same design that Rana has on his outfit. He has a long brown strap around his chest and has a gold band on his upper left arm.

He is very courageous and adventurous, as he and his wife Cattleya used to explore the land, looking for treasure and hunting formidable creatures, before Rana was born. It is thought that he was the one who killed Delmore.

He is a formidable opponent, and is very strong on his own, but him and his wife together make a force to be reckoned with.

He's also a great blacksmith: his first work was Giant Killer, Cattleya's sword, and later he combined his blacksmithing skills with the alchemy of his old friend Cyan to create Claudette's lightning sword Thunder Clap. 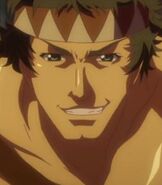