Start a Wiki
''Queen's Blade: Vanquished Queens is an alternative series in the Queen's Blade franchise. It's remarkable for its depiction of the cast being "vanquished", or defeated in means usually contradictory to the what happened in the anime. Beginning as visual books, it has also been animated into four OVA's, which adds some additional story to some of the cast.

Similar to the release of the Premium Visual Book OVAs for Queen's Blade: Rebellion, each episode is released on a single Blu-ray disc and has an accompanying omake episode focused solely on one of the main characters from the story episode. 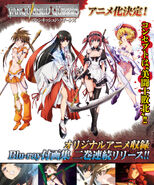 Add a photo to this gallery
Retrieved from "https://queensblade.fandom.com/wiki/Queen%27s_Blade:_Vanquished_Queens_(Series)?oldid=50742"
Community content is available under CC-BY-SA unless otherwise noted.