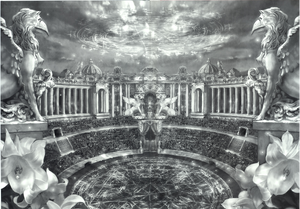 Queen's Blade is a single-elimination combat tournament that is held every four years to determine who will be Queen of the continent.

Any woman twelve years old or above, and of sound mind, may participate, including foreigners and even intelligent beings that aren't strictly human.

Though weapons are allowed and the participants are encouraged to fight with the deadliest techniques they might possess, a match can't result in the death of the loser.

The tournament brackets are not made public, but the date and the location of the match will be communicated three days in advance. The bracket is created by the current queen, and delivered via the royal mages.

The battles are broadcast to the whole Continent through magical crystal balls.

The Queen's Blade tournament started 120 years ago, following the tradition from the founders of the Continent: "The strongest woman can rule this country."

The twenty-eighth and twenty-ninth Queen's Blade tournaments were won by Aldra, thanks to the great demonic powers she received from Delmore.

The thirtieth tournament was won by Leina, who relinquished the throne to her sister Claudette.

As of Rebellion, the tournament has been abolished due to Queen Claudette's mandate.

-Alleyne and Nowa vs. Echidna and Irma

Queens of the Continent

All participants in the Queen's Blade tournament