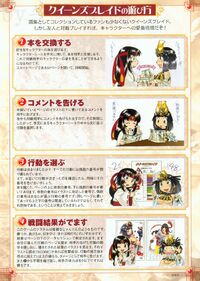 Play requires two players and at least two "visual combat books", with each player choosing a character (i.e., a book) from those available. At the start of play, each player removes the character sheet for that character from their book and hands the book to his or her opponent. The character sheet lists the various combat actions which the character can take during the battle. The combat book lists the effects of the attacks in tables, and serves as a visual reference for what the other player is doing. Hence, each player views entries in the book from a first-person perspective, seeing only their opponent and not themselves.

During each turn or combat phase, players secretly select an action from those shown on their card, possibly influenced by the results of previous turns. Players then simultaneously reveal their intended action, by number, to each other. Using the character sheet to cross-reference their action with that of their opponent, players then turn to a specific entry in the book they are holding in order to determine the results. These effects may include hit point loss (i.e., a wound), as well as any restrictions on the opponent's next move (which is read aloud to them). The first character to reduce their opponent to zero hit points wins.