Queen's Blade Rebellion Bitoshi Senki is the first volume compiling the "Illustrated Stories," the chapters that detail Rebellion's canon story on an episodic basis. Besides the 10 chapters that were published at Hobby-Channel's site, it contains 2 extra chapters, a few small summaries and the bios of the new characters. However, it doesn't include the "Setra's Room", the 10 behind-the-scenes comedic pieces that accompanied the original chapters.

The Princess Knight Annelotte faces the Queen Claudette to avenge her father, but is defeated and captured.

Leader of the Fang

The Leader of the Fang, Elina, tortures Annelotte with a slime made from a part of Melona's body. When Annelotte snaps and tries to awaken her demonic self, Elina knocks her out.

A group of rebels help Annelotte to escape, and looking for strong fighters to join her cause, Annelotte goes to the Little Elves Forest and finds her childhood friend, Yuit, and the clockwork automaton she operates, Vante.

The Little Elves Forest is burned down, and after losing the magic stone she was guarding, Yuit decides to accompany Annelotte in her quest.

Elina interrogates Mirim, a village girl, about Annelotte's whereabouts, and is pushed back by an unknown attacker when Annelotte and Yuit appear. Ymir hires Mirim to work for her.

To punish Elina for her failure, Ymir tries her new Hyper Vibration equipment on her, but isn't satisfied by the output she gets from Elina.

Ymir installs the Hyper Vibration equipment on Mirim, and though the girl can't control it properly, the "Strongest Fighter" is born.

Mirim finds Annelotte, Yuit and their group of rebels and defeats them with ease. Annelotte manages to protect Yuit in the nick of time, but is wounded badly.

The Beginning of the Darkness

Yuit and Vante try their best against Mirim but are overpowered, and when it seems to be the end for Annelotte and the Rebel Army, Annelotte's demonic blood awakens.

Annelotte's demonic side manages to push back Mirim, Elina, and Ymir, and after they leave, Yuit brings Annelotte's gentle side back.

Annelotte, Yuit and Mirim go to Hinomoto to find Tomoe, who trains Annelotte but can't leave to help them fix the situation in the Continent.

As per Tomoe's suggestion, Annelotte and company find Maria, and together they fight and defeat a group of ruthless creatures called "magic soldiers," with armor using the same technology as Mirim's. 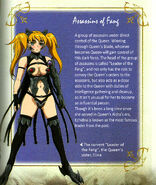 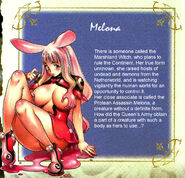